How Roofs are Framed

If you have read our other articles in this section you know that your roof may be held up by conventional stick framing, the traditional method using 2X lumber, or by trusses. Either way the framing elements rest upon some other element or elements of your home and that load is transferred down to the foundation, piers, steel beams, or wood beams resting on piers. For sure the two sides are weight bearing. Some trusses require support somewhere near the center. A traditionally stick framed roof that utilizes properly sized lumber does not require center support but the ceiling joists usually do. Sometimes roof rafters are under-sized for the span they must cover. When built that way a knee wall, short wall section, may be located near the mid-point of the span. The rafters may be one long piece or may over-lap at this knee wall. If such a wall exists it is highly probable that it should be considered a "load bearing wall".

The whole thing is more complicated than can be adequately explained in an Internet article. Sorry, but that is the truth. Consult a structural engineer if you have any doubts. For projects you may be considering around the home the only thing you really need to be concerned with is that you do nothing that changes or interferes with that weight transfer. If you fail in that goal you may wind up with sagging, leaking or otherwise impaired roof. In extreme cases tearing out the wrong thing might lead to the roof coming down onto your head; usually in slow motion; nothing like you see in the movies.

Not a desirable goal but the least of your worries as you go about your remodeling projects unless you are removing an exterior load bearing wall section. Even then there is always a way to do it and do it safely. We will cover that in greater detail in later articles when we show you how to safely remove a simple load bearing wall and repair it.

The two most common roof styles in use in the US today are a gable roof or hip roof. As we mentioned in our ceiling article either roof design may be constructed using trusses or stick framed. From the outside you most likely will not be able to tell which method was used.

A conventional stick framed gable roof on a basic rectangular house looks a lot like the capital letter A flattened out a bit. The horizontal cross bar is the ceiling joist and it peaks in the middle at the apex of the A. The portion below the cross bar and outside the exterior walls is the roof overhang. There is a ridge board at the peak of the A that runs perpendicular to the rafters and the rafters are secured to it and each other. This ridge board runs from the outside edge of one wall to the outside edge of the opposite wall. A truss roof does not have a ridge board but the trusses are usually tied together with perpendicular 2X stock below the roof line. 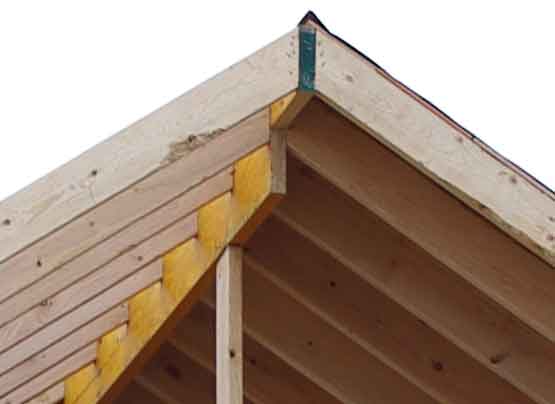 A stick framed hip roof also has a ridge board that runs perpendicular to the rafters of the roof on the long axis but stops where the hip rafters begin. The image below illustrates that fairly well. Hip style roofs transfer some portion of the load to all four exterior walls. There is one long oversized hip rafter that runs from the end of the ridge board down to each corner of the house. This load is minimal on the hipped ends but it is still present and needs to be considered when undertaking any remodeling project. 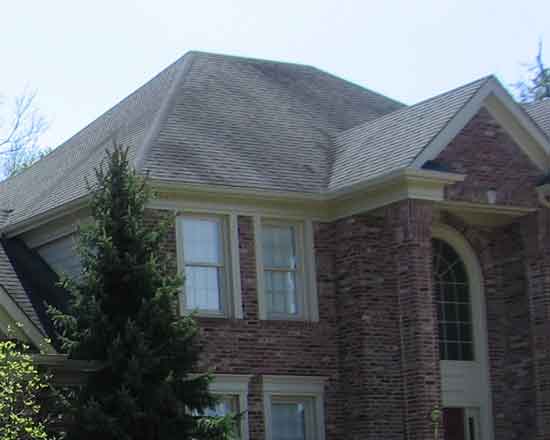 We aren't trying to scare you or discourage you from your remodeling projects; we just want you to proceed armed with the knowledge of what to watch out for and to do them with positive results.

This article completes our introduction to house framing articles. Next we will deal with some specific framing topics.

Introduction to House Framing
A house built using traditional western platform style framing is built on a foundation over either a basement or crawl space. The same methods of con................

How a Floor is Framed
When a house is built over a basement or crawl space the floor, the platform must be framed and covered with plywood or OSB before the walls can be er................

How Walls are Framed
A home contains interior and exterior walls. One should always assume that an exterior wall is a load bearing, a wall that supports a load from above,................

How Ceilings are Framed
How your ceiling is framed will vary. If your ceiling also provides the floor joists for a second story it will be made of dimensional 2X stock or pos................