How a Floor is Framed

When a house is built over a basement or crawl space the floor, the platform must be framed and covered with plywood or OSB before the walls can be erected.

We are going to discuss this process using dimensional lumber since that is still more widely used than engineered floor joists. For the most part anywhere we say lumber the word engineered joist can be substituted and the comment will still be true.

The image below shows a home under construction using engineered beams instead of traditional joists. It appears to be ready for the for the sub floor. 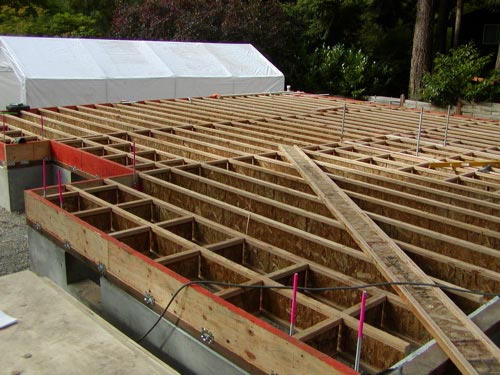 A floor must be designed to hold up the house and all of its components along with the contents and the people while not deflecting more than a miniscule amount, 1/360 of an inch. The elasticity of lumber has long been known to the engineers. Different species and grades of lumber have different properties. For this reason a given size of joist is only allowed to span a certain distance and that distance varies with how often the joist is repeated.

This repetition of joists is called spacing on center, OC for short and refers to the distance from the center of one joist to the next. In modern construction the spacing is 12, 16, and 24 inches with 16 being the most common. In the early 1900's I swear they divided the number of boards they had by the space they needed to fill and that became the spacing because you will find a lot of strange spacing in old houses. Of course they were decking the thing with 1x6 or 1x8 boards ran on a 45 degree angle to the joists, hand nailed with heavy nails and did not need to be concerned about lining up 4x8 sheets to the joist spacing.

If your span is longer than allowed for the larger joist sizes you may have a center pier, a set of center piers and wood beam or even a steel beam to reduce the span down to a manageable distance.

In a house that is a simple rectangle all the floor joist generally run in the same direction and are capped on each end with what is called a rim joist. The rim joist may be doubled if there is to be a second floor to increase the load carrying capacity. Since local codes always prevail it may be doubled anyway in your location.

Once upon a time in the United States every set of floor joists were braced with bridging, 1x3's, cross braced in a series of X's and repeated every 8 foot or so along the run of the joists. This bridging made for a very sturdy floor but it also takes some time and skill to install. Modern construction doesn’t seem to have the time or the will to install it. That is really a shame because it makes for a much sturdier floor.

A few builders will add blocking, short sections installed perpendicular to the joists and between them, in lieu of bridging. Blocking is better than nothing as it helps to unify the floor but it does not take the place of well fitted bridging.

A lack of bridging or blocking simply means your floor will have more bounce than a floor that has one or the other. It isn’t anything to lay awake and worry about.

Once all the floor joists are in place the decking material, the sub-floor is nailed and glued to the joists. It is at this point that the wall construction begins.

Introduction to House Framing
A house built using traditional western platform style framing is built on a foundation over either a basement or crawl space. The same methods of con................

How Walls are Framed
A home contains interior and exterior walls. One should always assume that an exterior wall is a load bearing, a wall that supports a load from above,................

How Ceilings are Framed
How your ceiling is framed will vary. If your ceiling also provides the floor joists for a second story it will be made of dimensional 2X stock or pos................

How Roofs are Framed
If you have read our other articles in this section you know that your roof may be held up by conventional stick framing, the traditional method using................